If you take the sound frequencies of a G major diatonic scale, and raise them by 40 octaves, they will now be light frequencies. As Hz frequencies, these numbers are very, very long. And so light is measured in nanometers, which is the length of the light wave and not its frequency. This is a just intonation scale and the Hz frequencies are an exact match for the nanometer measures and the color examples on the right. With normal equal temperament the notes will still fall into the same color bands, they will just be a slightly different shade. 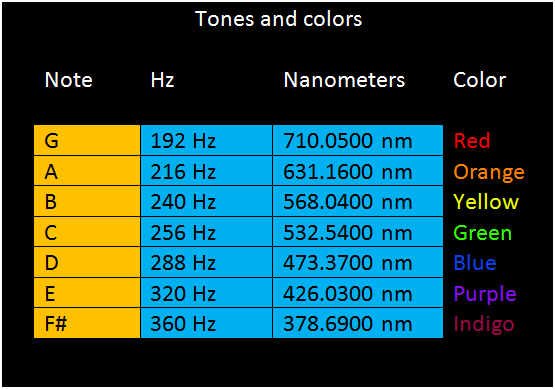 The three notes in the G major chord (G – B – D) each fall into one of the three color bands occupied by the three primary colors red, yellow and blue. All 7 notes in the scale fall into the color bands for the 7 colors in the rainbow. This is very interesting because with paint as the medium the three primary colors are used to mix the 7 colors. These 7 are then used to mix the 12 chromatic colors.

In Babylon the three highest deities, Enki, Enlil, and Anu who basically made the world were assigned with numbers that make a major chord when played as sound frequencies.

In sacred geometry the Platonic and Archimedean solids are made from only triangles, squares and pentagons. When expressed musically these three polygons also represent the major chord.

So the same pattern exists in all of these places, the major chord or the three primary colors are always the "source code".

In the following album each track is tuned to an octave of a different color of the rainbow. The frequencies are the same as in the chart above.
You can learn how to tune your music to specific frequencies in this book.
Go to the next page.
Powered by