The Numbered Deities of Babylon 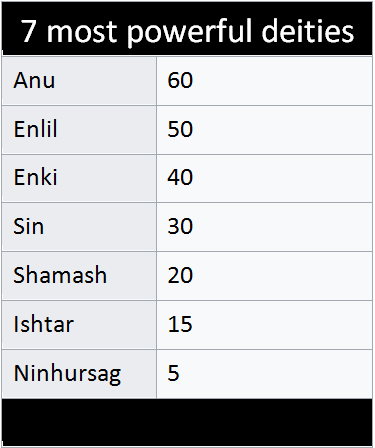 In the video below I have shifted 5 Hz - 15 Hz - 20 Hz - 30 Hz - 40 Hz - 50 Hz - 60 Hz into a higher key. Musically this chord for the Gods that created the world is not much different to the chord for the building blocks of the Platonic and Archemedean solids. Some of the notes are just in different octaves.
It may seem as if the Babylonians chose musical numbers intentionally. This however does not seem to be the case. It seems like they actually chose mathematically useful numbers, the fact that they are musical tells you that mathematics and musical harmony are connected. Numbers that make good sounding intervals also behave better mathematically, while numbers that sound odd are also less useful in maths.
​
Below you can see that these musical numbers are also mathematically important numbers. All of them are regular numbers and some are also divisors of 60 (very important numbers in Babylonian mathematics). 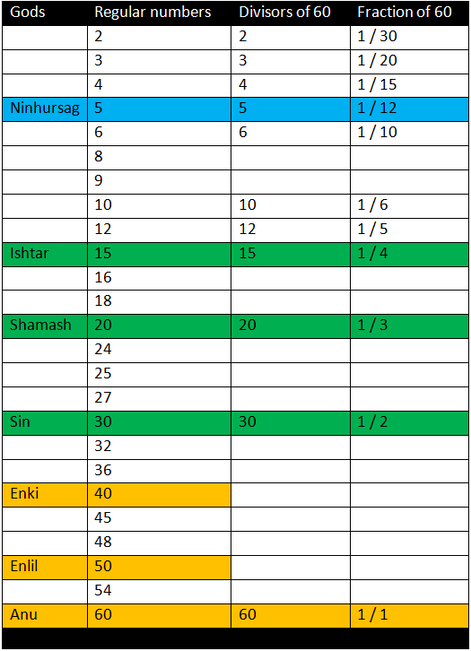 ​The Babylonians did a lot of their mathematics using only regular numbers (products of the prime numbers 2, 3 and 5). They avoided products of higher primes like 7, 11 and 13 because they produced more irrational numbers and did not behave as nicely as regular numbers do. They did know how to work with these numbers, but they used other more complicated sums to work with them.
The Babylonians had many other deities that were assigned with numbers, less important deities always got less important numbers. Female deities for example were not as important as males, ​in the following image you can see that Antu (55) and Ninki (35) for example did not have regular numbers or divisors of 60.​ Ningal was assigned with the number 25, this is a regular number but not a divisor of 60. Ishtar (also named Inanna) was the Goddess of love, beauty, sex, desire, fertility, war, justice, and political power. She was possibly the most powerful female deity, which is why she got the number 25, a regular number and a divisor of 60 even though she was female.

In the following image you can clearly see that regular numbers which are also divisors of 60 were coveted positions. 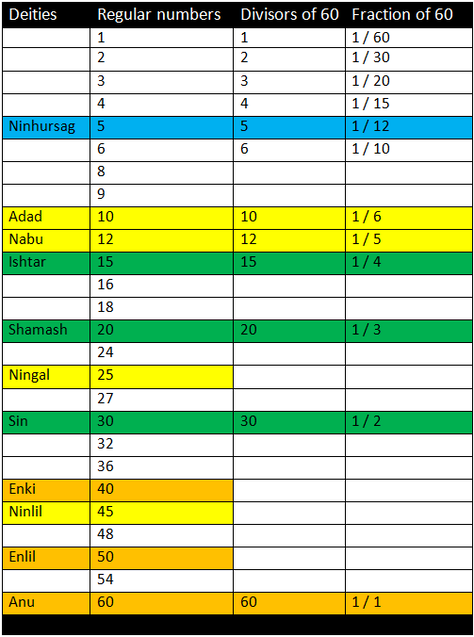 Other ancient cultures also had a preference for regular numbers.
Below is a translated Sumerian tablet showing sexagesimal reciprocals (5-smooth numbers and their reciprocals). They used these tablets to make calculations very quickly and easily. Non-5-smooth numbers did not work for this.

The Mayan calendar is entirely based on 5-smooth numbers. 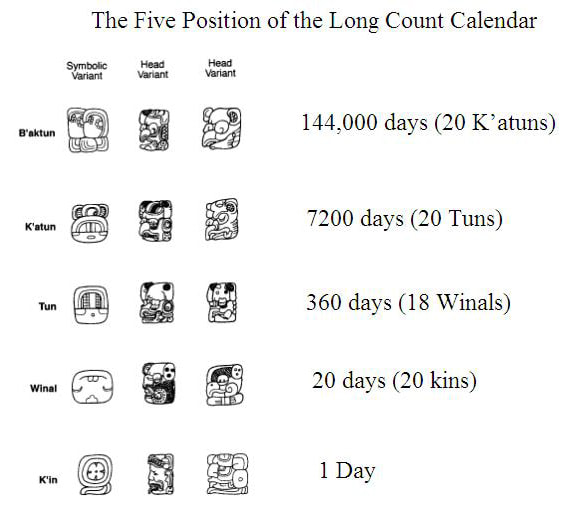 And the Yugas from ancient India too. 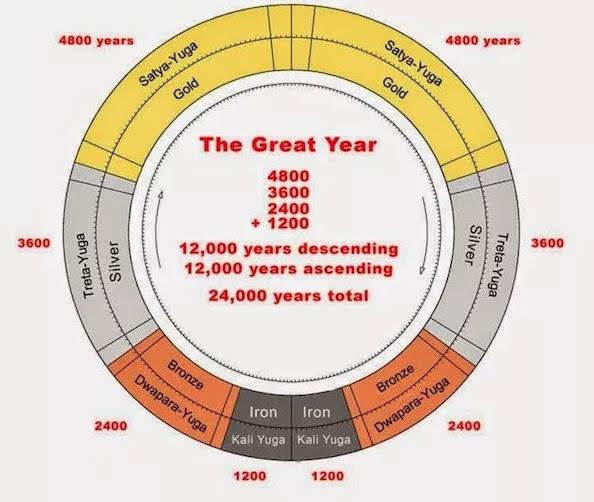 If you want to learn more about this, it is all in this book.
Go to the next page.
Powered by